“Music and the Brain”

As I mentioned in a previous article, neurologists have found that music activates the brain in unique ways. According to Kathleen M. Howland, a Speech and Music Therapist, babies and newborns can detect the beats in music and sea chanties were used to bring sailors together to complete a universal task. People with Parkinson’s Disease can walk normally to music and children with autism respond well to it. In his book, “This is Your Brain on Music,” Dr. Daniel J. Levitin tells how he had patients who were unable to read a newspaper, but were able to read music. People who have had strokes may not be able to speak, but they can communicate through song and people who stutter, do not do so when they sing.

In the book, “Music and Autism, Speaking for Ourselves” Michael B. Bakan explains that ‘the strong identification with music that many autistic people have, sometimes in tandem with exceptional musical abilities, has been observed frequently since the advent of autism studies in the 1940’s.’ Autistic people are able to express themselves through music or the playing of music when they can’t talk to communicate.

Dr. Daniel J. Levitin goes on to say in his book, “This is Your Brain on Music,” ‘that musical activity involves nearly every region of the brain that we know about and nearly every neural subsystem.’ In other words, nearly all five parts of the brain; the frontal lobe, temporal lobe, parietal lobe, occipital lobe, and cerebellum are all affected by music in some way.

‘The cerebellum is involved in emotion and the planning of movements. Tapping along with music involves the cerebellum’s timing circuits. And ‘the emotions we experience in response to music involve structures deep in the primitive, reptilian regions of the cerebellar vermis, and the amygdala-the heart of emotional processing in the cortex.’

If you would like a more in-depth look at the brain, and how it functions, I highly recommend Dr. Levitin’s book. He goes into intricate detail which I found fascinating but for the purpose of this article, was not necessary.

Stephanie Thompson is a classically trained inspirational pop singer-songwriter, vocal coach, actress voice-over artist, and member of SAG/AFTRA and Actor’s Equity. She is the Entertainment Director and the main performer for EmpoweringHumanityTV.com, and the networking events. Currently, Stephanie is impacting many lives with her healing through music online educational programs. 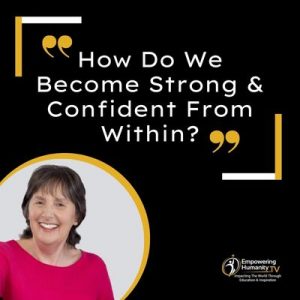 You Are In Control Of Your Success!

You Are In Control Of Your Success! By: Aimmee Kodachian Have you ever felt helpless, yet your intuition told you you will make it? You

PrevPreviousYou Are In Control Of Your Success!
NextAre You Afraid of FailureNext